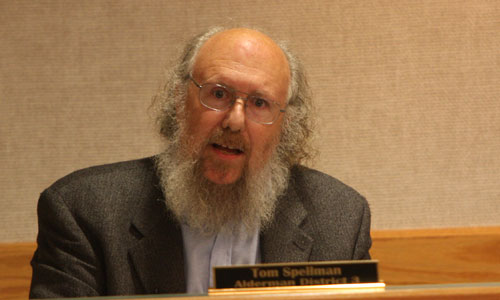 Like something out of a South American country, Lake Geneva Mayor William Chesen “suspends” all his political opposition from elected office. He does so on various “verified charges” that he alone “verifies”.

On the eve of 9.11 Mayor Chesen serves “suspension” notices to Aldermen Penny Roehrer, Arleen Krohn, Thomas Spellman, and Mary Jo Fesenmaier. He claims he has the power under Wisconsin Statues 17.16(3).

Mayor Chesen then plans to hold a hearing on 9.23.2009 with the rest of the surviving alderman, 4 out of 8, and try to remove them permanently from office. He plans to appoint replacements to act as judge, jury, and executioner. The replacements will be the very same persons these Aldermen defeated in prior elections.

The so called charges are “neglect of duty, inefficiency,official misconduct, and violation of open meetings law.”

This is not the first time Mayor Chesen, in his first term of office, has harassed his opposition on the city council. In 2008 he talked Walworth County District Attorney Phillip Koss into filing “disorderly conduct” charges against Alderman Spellman for a 5 minute phone conversation he had with City Clerk Daina Dykstra. It seems Mr. Spellman got very upset and started “yelling” at Mrs. Dykstra over the phone when she removed an item from the agenda that the committee of the whole had put on the agenda. In the past your correspondent has talked to Mr. Spellman over the phone and he is very loud–he is hard of hearing. According to Mr. Spellman about two days after he felt remorse and e-mailed Mrs. Dykstra an apology.

District Attorney Phillip Koss dropped the charge of “disorderly conduct” only after Mr. Spellman hired a lawyer and made another “apology” to the city clerk. As one Alderman said the Mayor is just harassing us and trying to drive us out of office by making us hire lawyers on bogus trumped up “charges.”

Koss is a Republican in a very Republican controlled county of Wisconsin. Mayor Chesen is also a Republican with a George W Bush poster in his living room.

Also long time political hack , and former Mayor and Alderman Beatrice Dale, took out a recall petition for the removal of Penny Roehrer from office on 9.9.2009. because she ” does not vote according to the wishes of here constituents. She voted to appoint an alderman who is opposed by the most people of the distinct which he would represent…” This refers to the appointment by the city council of Spiro Condos on 8.24.2009.

Mr. Condos ran against Mr. Chesen in 2008 for mayor, in the nastiest campaigns in living memory.  In that race Mr Condos received  the most votes, 267, in the first district.

A Shitstorm of Criticism Rains Down on the Mayor

The Price of Justice or a Vendetta?